Wondering how to create a meme by yourself? The most simple way to make memes is to use a meme generator. The MockoFun online meme maker is free, simple, accessible and it doesn

🤓 How to Make a Meme Online?

Wondering how to create a meme by yourself? The most simple way to make memes is to use a meme generator.

The MockoFun online meme maker is free, simple, accessible and it doesn’t require any kind of software installation.

So, How Do You Create Memes?

First and the most important step is to came up with a GREAT meme idea! The meme idea has to be unique and original.

Second, search for the right meme pictures to compliment your idea.

Third, add a good catchy text and then … hope to become viral.

Here is a step by step tutorial on how to create memes online with MockoFun.

First, you have to make a free MockoFun account.

Then, click on the Create button to open the tool. Go to New menu on the right to make a new document.

There is no standard meme size. But, make sure to make one that is a good size though. I would recommend a minimum width of 500 pixels. 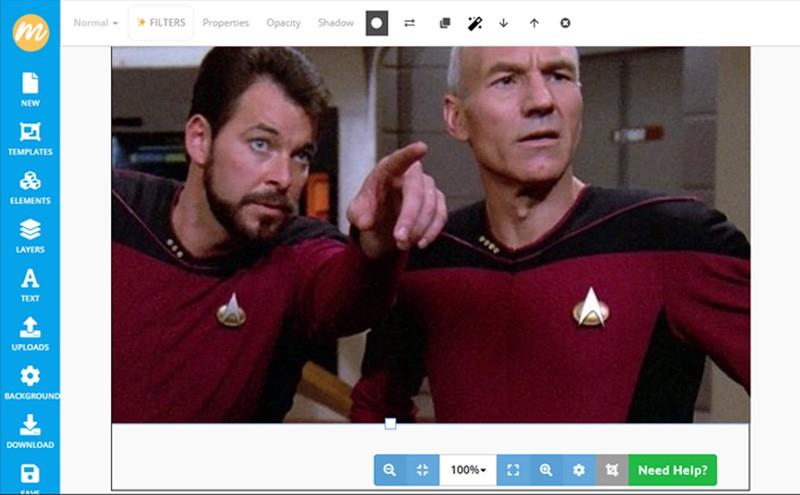 Drag the corners of the image to resize it. You can also rotate the image. If you want to crop picture, use the Crop Image button from the bottom right menu.

Optional, use the MockoFun photo editor to apply different filters to your meme picture. Go to Filters from the top menu and you have a list of non-destructive filters.

To add text to photo, go to Text menu on the left and add a text. From the fonts drop-down list choose the font Impact.

If you are looking for a more modern meme font, in MockoFun you have over 800 free online fonts to choose from. 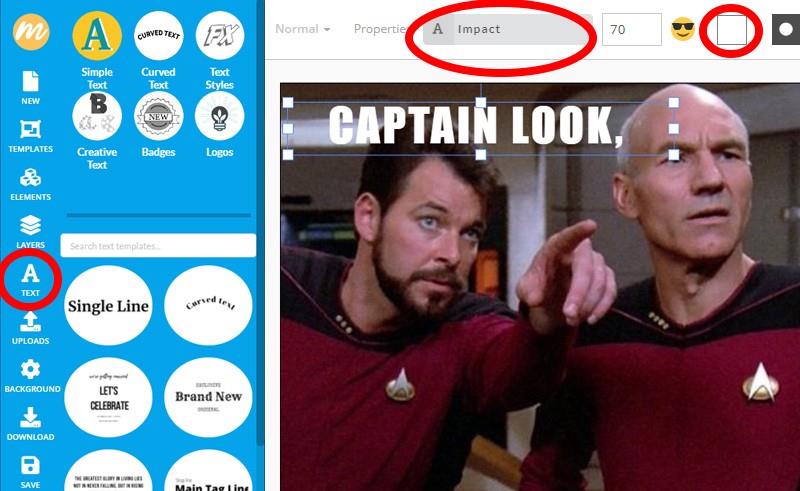 Set the Color of the text white. Then, double click on the text to edit it. You can also adjust the letter Spacing.

Most memes use white text with black outline font. So, go to Stroke and set the size of the text outline and the color black. 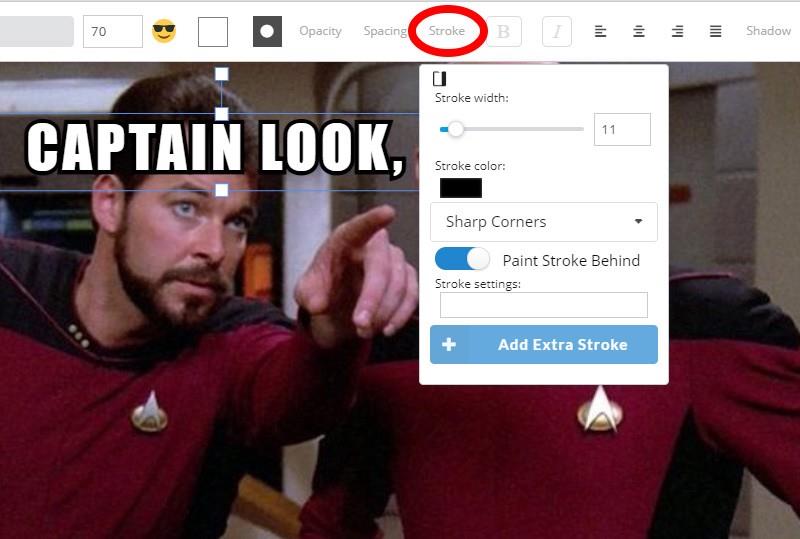 To add meme text on the bottom of the image, click on the Duplicate button. 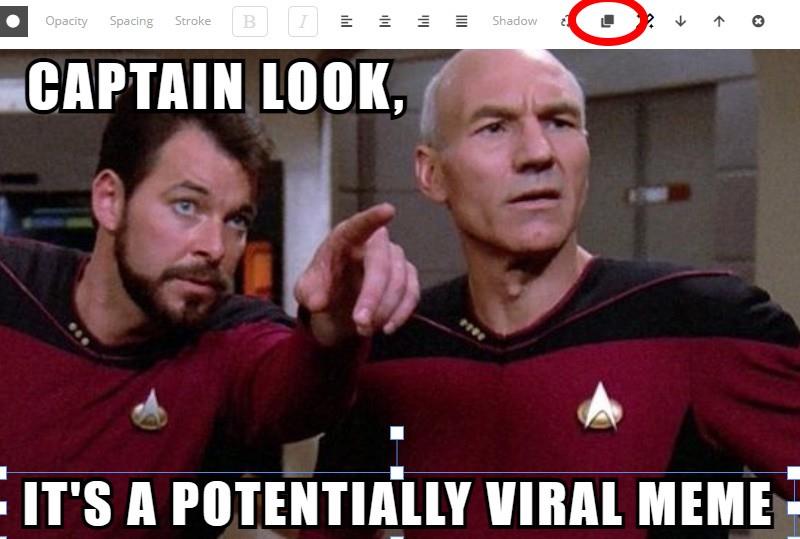 We all know that almost all of the meme text is linear text. But, if you want to add other type of text, with MockoFun you can create circle text or spiral text.

If you want to create a cartoon meme look, use the Emoji button to add meme emoticons. 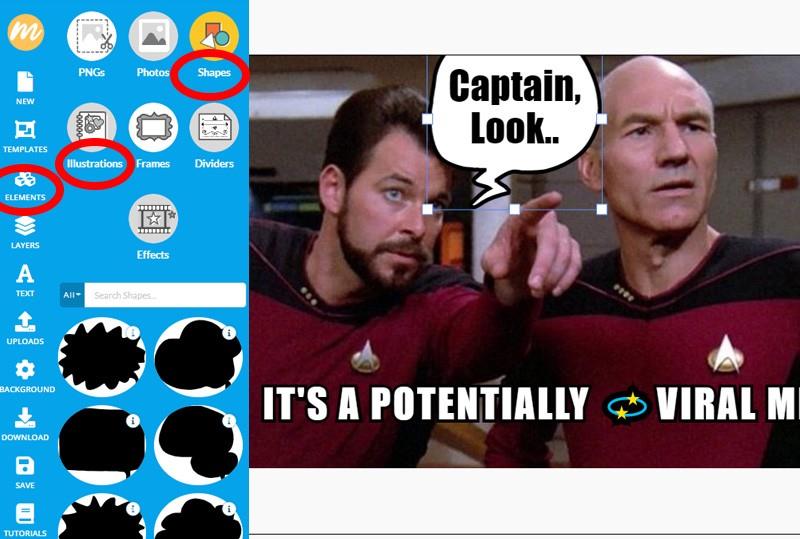 Click on the Save button to save the meme template in your gallery. 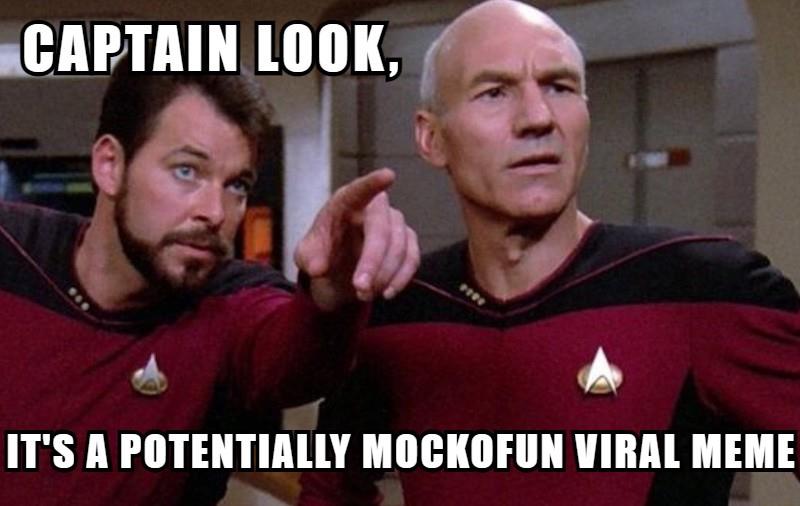 Quick memes have only one meme picture with text. But, you can always add another meme image and another one, to continue the story. 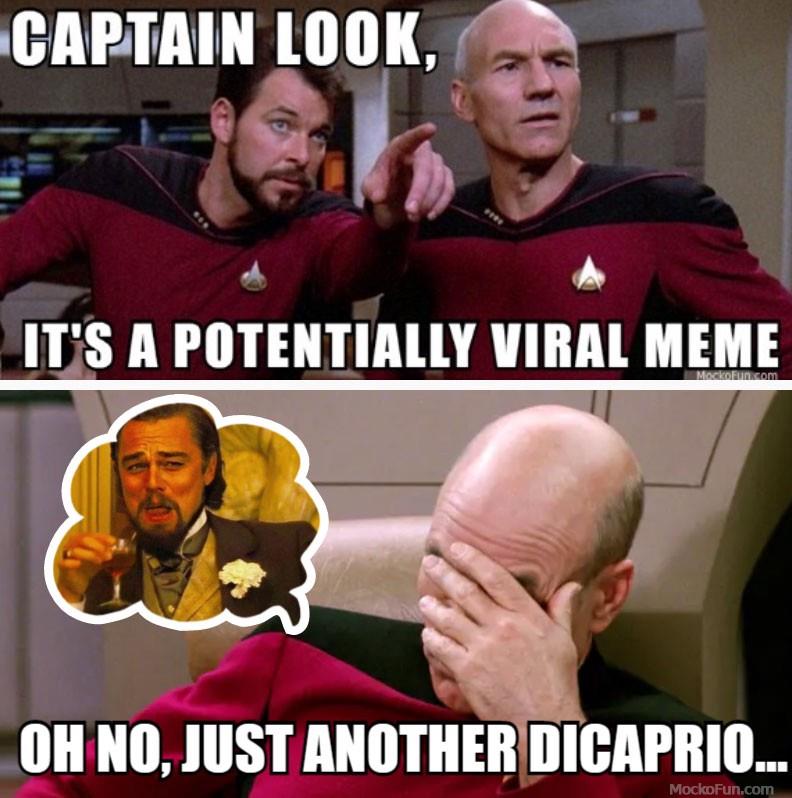 Now you know how to use the MockoFun meme maker online to create memes. You can also use this online tool as a plain text meme generator.

Now, let’s talk a little bit about the meme templates and what meme format should you choose.

Classic meme, the most simple meme that you can make includes an image and a text added on the top and/or bottom of the image.

Check out this MockoFun square meme template with top text and bottom text. 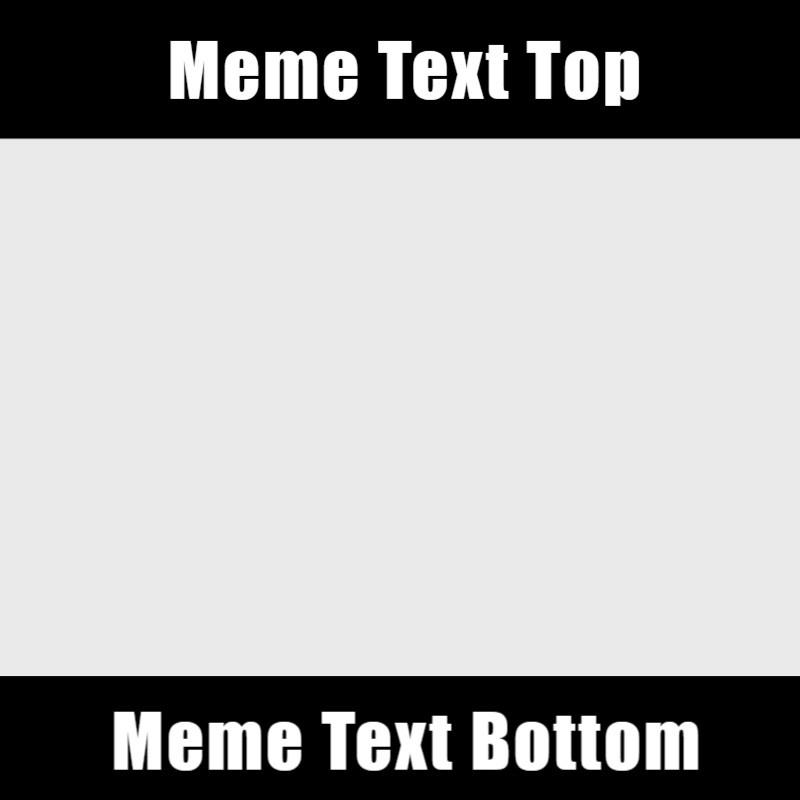 This is definitely the most easy meme that you can create. But, you must know that a quick meme with image an some boring text will not go viral. 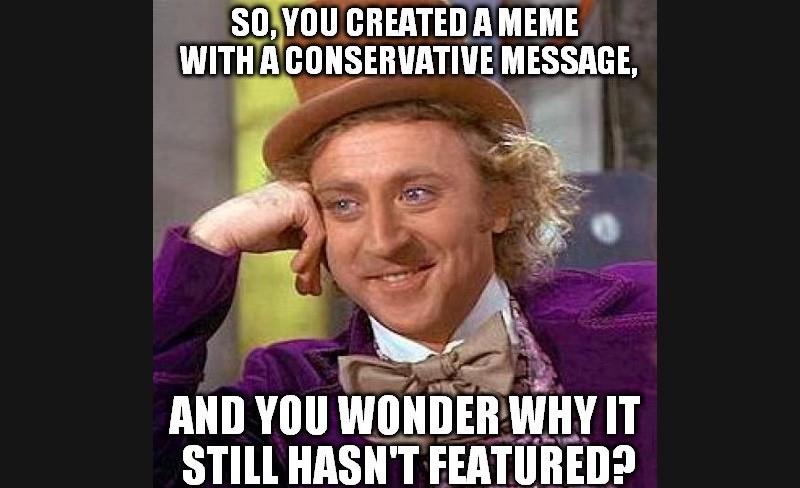 Another cool meme format that you can use is the square meme template from MockoFun. 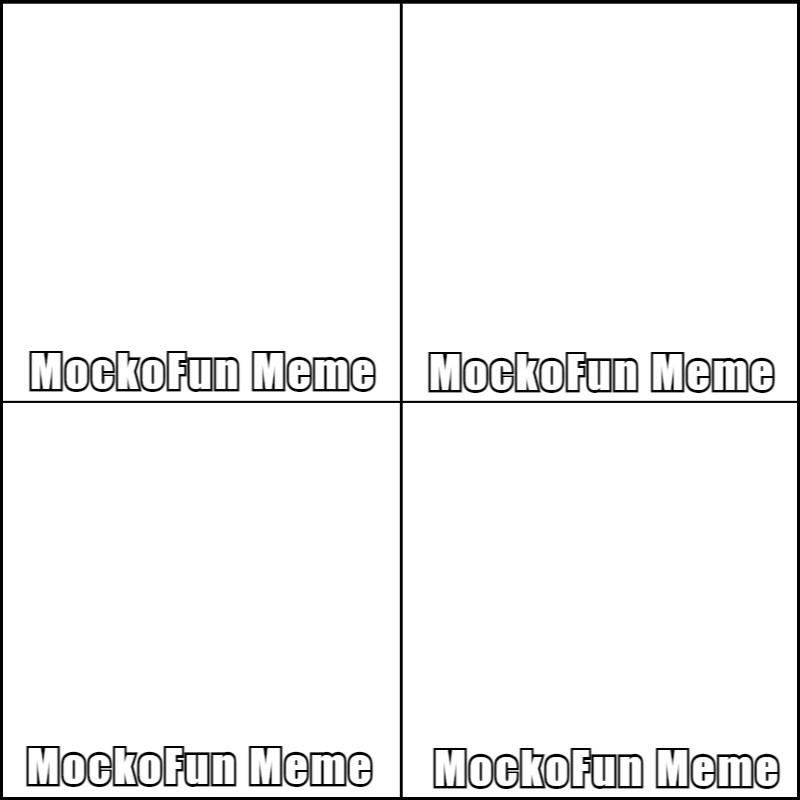 Here is an example of a 4 square meme template. 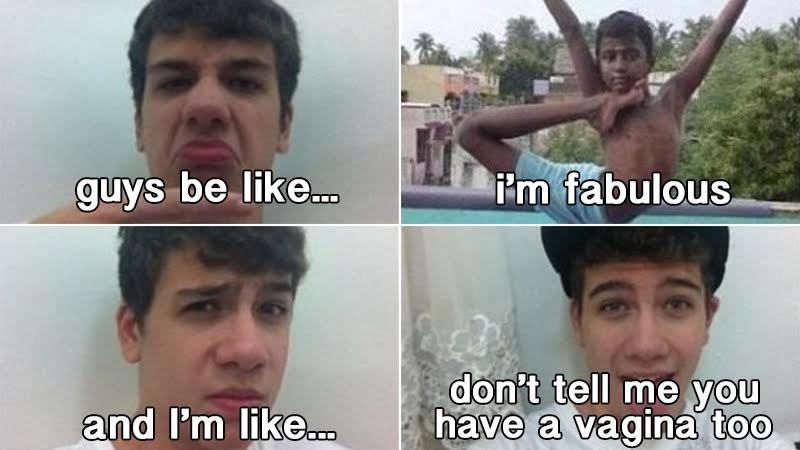 Another modern meme format is the six picture meme template. 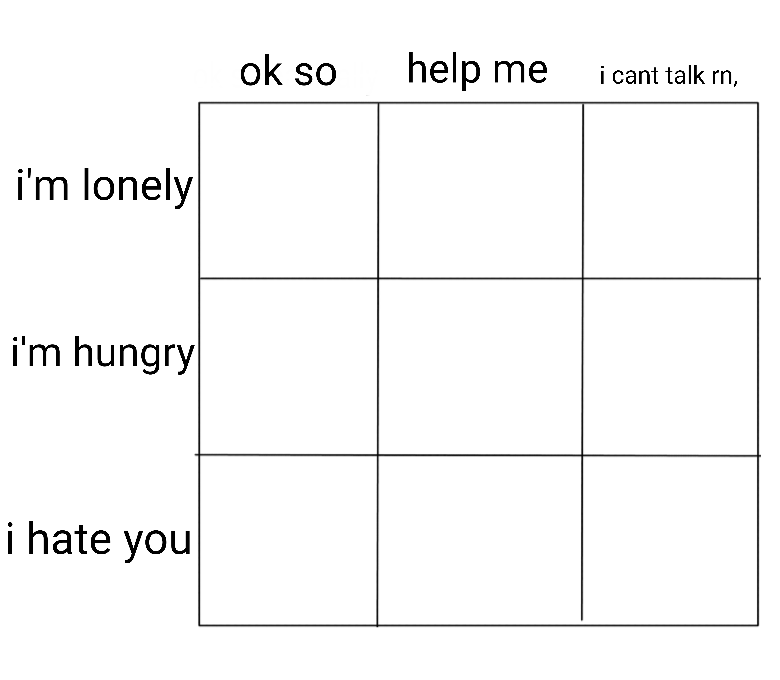 You can also use MockoFun as a 2 image meme maker. It’s really easy to use and you can do any meme design. 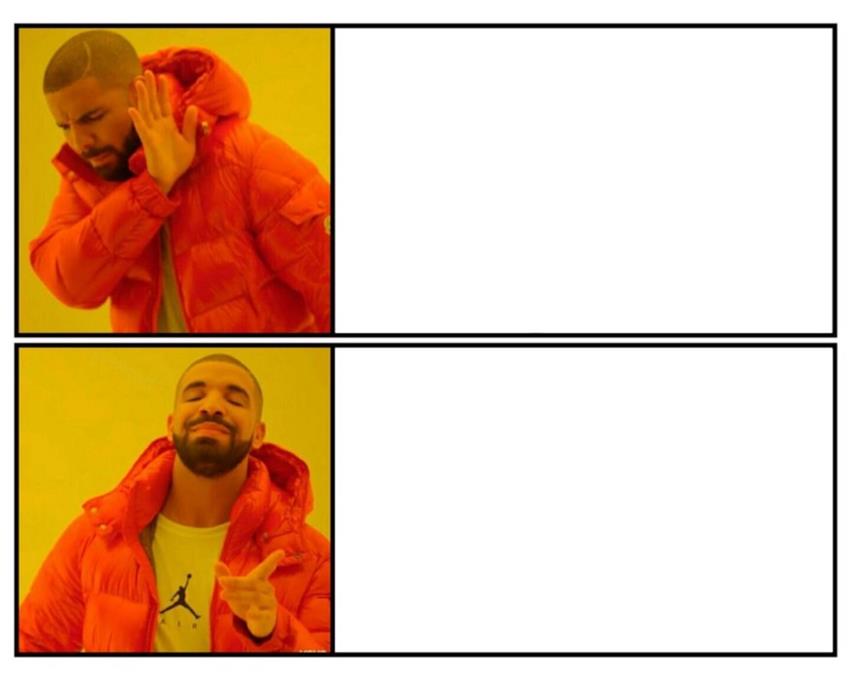 So, there are lots of meme formats that you can use. The meme layout depends very much on your meme idea.

For example, you can use multiple images, combine different meme characters, use multiple texts and also add graphics, cutouts, etc.

Where to Find Meme Pictures

Many memes are made using popular culture (image macros of other media, snapshots, etc.), although this can lead to copyright issues.

Here is a list with over 100 meme pictures that you can copy paste in MockoFun.

To add meme text, use a bold sans-serif font with white color and a black outline. This font style is easy to read and can be placed on any background image.

So, what is the best meme font name? Impact font generator is by far the most popular font used on memes.

Though Impact feels like the quintessential internet typeface, it was released in 1965.

In the image below, you have a simple meme template with the Impact font on the top and bottom of the image. 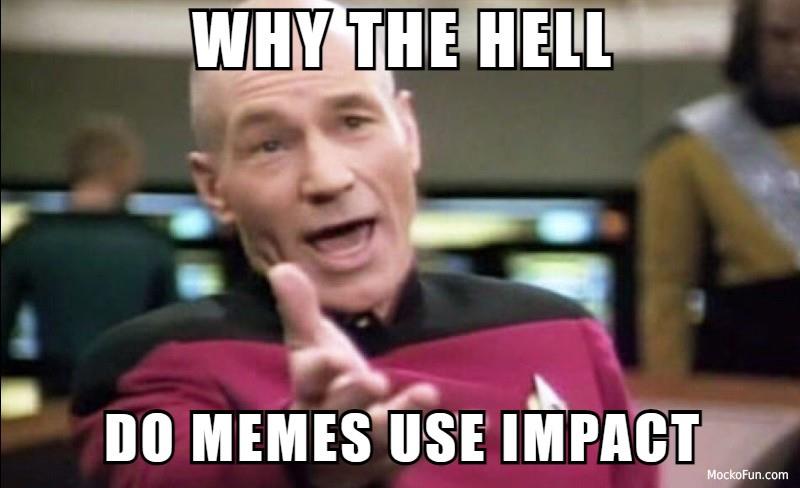 Download meme font if you don’t already have it installed on your computer.

Online meme generator apps like MockoFun, have the Impact font available for use.

If you are looking for fonts similar to Impact, here are some examples:

You can also check out thse cool classic fonts or use a more modern meme font. To add text to photo online with MockoFun it’s easy!

If you don’t know much about memes, here are some interesting facts that you should know. The more things you know about memes the better are your chances to make good memes 😉

What is a Meme?

A meme is an idea, behavior, or style that becomes a fad and spreads by means of imitation from person to person within a culture.

A meme acts as a unit for carrying cultural ideas, symbols, or practices, that can be transmitted from one mind to another through writing, speech, gestures, rituals, or other imitable phenomena with a mimicked theme.

The term meme is a shortening of mimeme, which comes from Ancient Greek mīmēma, meaning ‘imitated thing’.

The word meme originated with Richard Dawkins’ 1976 book The Selfish Gene as a concept for discussion of evolutionary principles in explaining the spread of ideas and cultural phenomena. Examples of memes given in Dawkins’ book: melodies, catchphrases, fashion, etc.

So what are memes? I am talking about the meme images from the internet that we all know and love (or not). 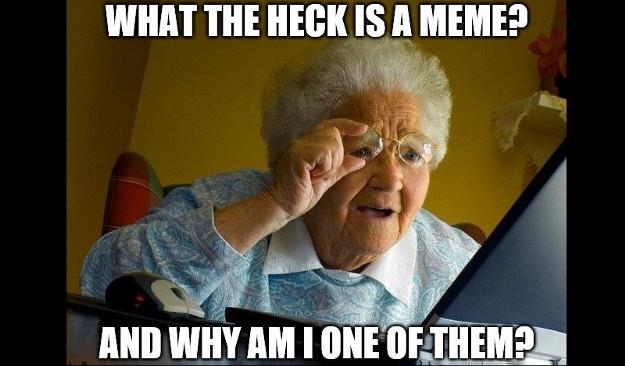 An internet meme, more commonly known as a meme, is a piece of digital media featuring a static image or an animated image with some text superimposed.

The text can be a concept or catchphrase and it frequently appears at the top and bottom of the image.

The meme can be a GIF meme, JPG meme, PNG meme or 🎬 video memes. There are lots of online tools like ClipChamp for example, that you can use to create meme videos for YouTube.

The best memes can spread via the Internet, from person to person via social networks, blogs, direct email, or news sources, mainly for humorous purposes.

What is a Dank Meme?

Dank memes can refer to “exceptionally unique or odd” memes. They have been described as “Internet in-jokes” that are “so played out that they become funny again” or are “so nonsensical that they are hilarious”.

How To make Memes vs. How to Make Good Memes? 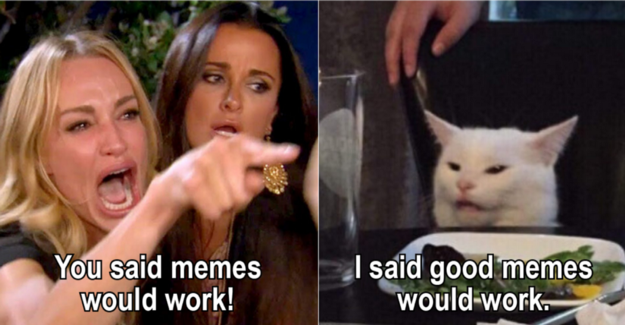 So, I am not really sure if making a good meme is a question of luck or not.

The success of a meme depends very much on the audience.

This meme for example would have been great 20 years ago. But, in 2020 this meme has only 14 Upvotes on Reddit. 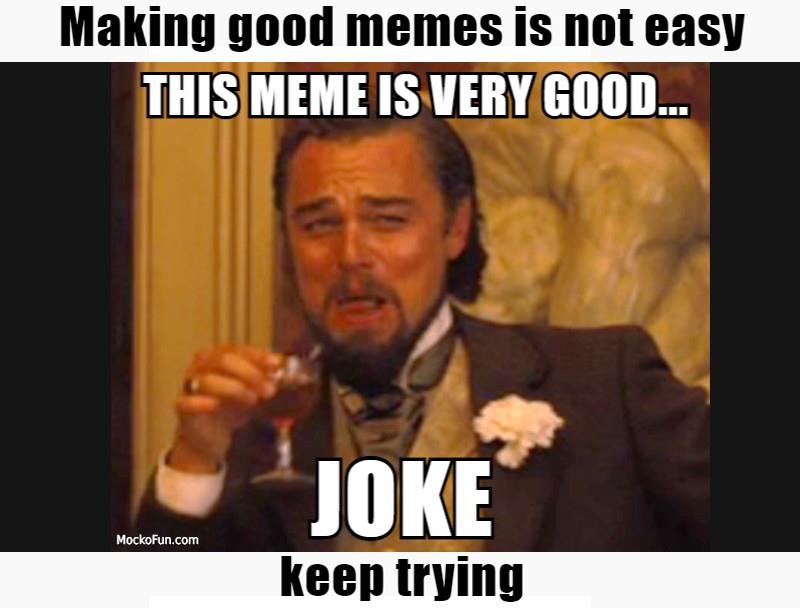 The best memes of 2020 so far promise a hilarious and demented year online. From quarantine jokes to Elon Musk’s wild baby name, to politics, Taylor Swift, or cake, the memes of 2020 have been a comfort in dark times.

Here are some of the best 2020 memes that you should know about.

How to Make Money From Memes

Use the MockoFun meme maker to create meme designs. There are people that make money from selling memes. But, how to sell a meme? 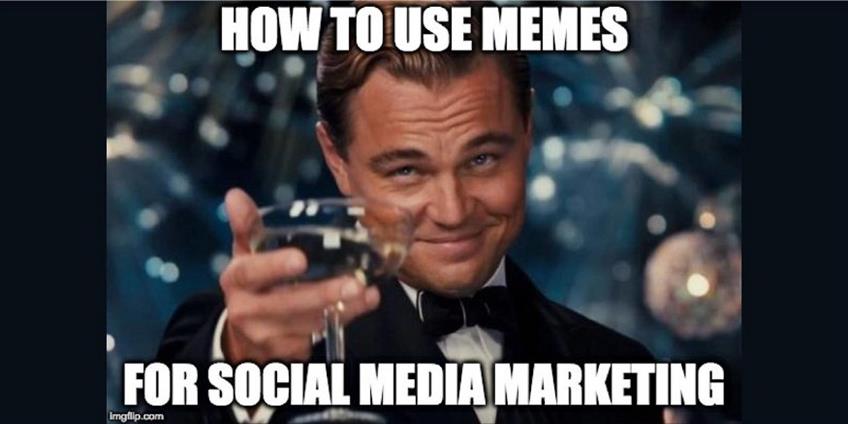 Here are some good ideas on how to make money from memes:

A Little Bit of Meme History

The first meme was introduced in a comic strip from the University of Iowa’s satirical magazine The Judge from 1921. 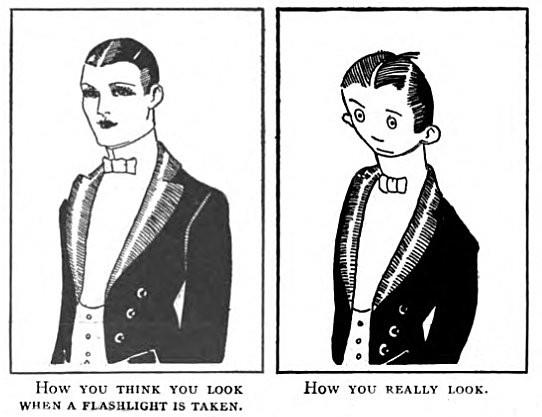 The 97-year-old comic strip is suggested to be the first recorded use of the popular “What You Think You Look Like vs. What You Actually Look Like” meme.

The first internet meme can be pinned back to a particular dancing baby that was spread around the internet, before finally appearing on an episode of Ally McBeal. 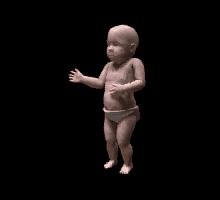 Baby Cha-Cha-Cha, also known as Dancing Baby, was the first meme to go viral on the internet. The meme was created in 1996 to showcase the amazing abilities of the new CGI software by Kinetix Character Studio.

In this article there are lots of interesting facts about memes. If you want to know more about meme like for example how the the top 7 viral memes actually started, read this.

In meme text, phrases are intentionally misspelled and incorrect grammar is sometimes used. Many memes utilize popular culture (especially in image macros of other media), although this can lead to issues with copyright.

Types of Memes [by Meme Images]

There are lots of types of memes. If we talk about the the type of images used in memes, here are some categories:

Types of Memes [by Meme Ideas]

Depending on the theme, there are different types of memes like for example:

There are also memes that talk about a special event or holiday like:

Another category of memes is by country. For example, some of the most hilarious memes are the Indian memes. The Japanese meme or anime memes are also considered to be very funny memes.

If you are on Reddit you probably know about the Reddit Meme group that has over 14m users. If not, check out the subreddit r/memes .

Usually memes are funny, made with funny characters … The meme faces are always very funny or even hilarious.

Here are some popular meme characters and meme faces that were used in many of the famous memes that we all know: 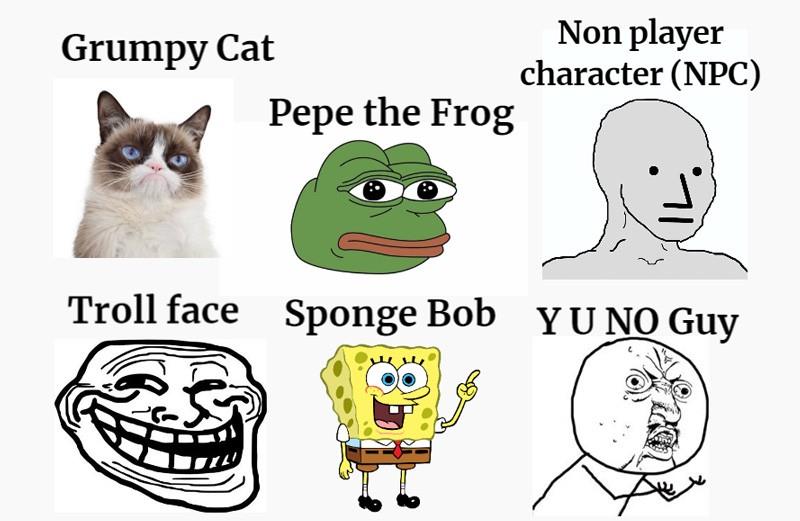 So, if you want to create memes use MockoFun. MockoFun is probably one of the best meme text generator.

No comment(s) for "Online Meme Maker"