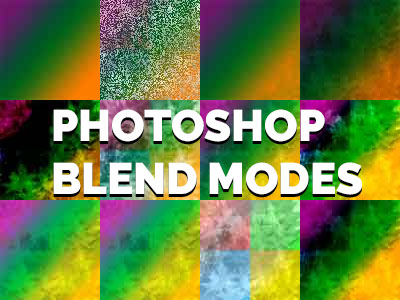 Photoshop and Elements allow for layer blend modes that change the way layers react with each other. Some of them you will use in every day work.

How do you know what layer blend mode to choose? Let's look at them and how they work, and take some of the mystery away! (Some. Not all.)

A Bit Of Color Theory

What Are Primary Colors, Secondary Colors and Tertiary Colors?

To understand blend modes, you need to know a little about color. Color is light, and likewise, light is made up of many colors. Objects absorb or reflect these light waves. Our eyes perceive these wavelengths as color. Let's start with the color wheel.

The COLOR WHEEL has 12 segments that consist of primary, secondary and tertiary hues, or colors.

The three PRIMARY colors are RED, YELLOW, and BLUE. They form a triangle on the wheel. These colors cannot be mixed by combining any other colors. They are indicated on the color wheel with a P.

Using the color wheel you can determine color schemes fpr balance and harmony in your artwork, webpages, desktop publishing designs or home decorating.

What Are Color Hue, Saturation, etc.?

The primary, secondary, and tertiary colors, or hues, are these colors at their full saturation or brightness; that is, there, there is no white, gray, or black added.

Value: the lightness or darkness of a color, or the relative amount (percentage) of white or black in a hue.

Luminosity, or Lightness: A measure of the amount of light reflected from a hue. Those hues with a high content of white have a higher luminance, or value.

Tints: white when added in increments to any color results in a lighter value of that color, called a tint. Blue and white make light blue, which is a tint of Blue.

Shades: black or gray when added in increments to any color results in a darker value of that color, called a shade. Blue and Black make dark blue, a shade of blue.

Saturation: The degree of purity of a hue.

Intensity: The brightness or dullness of a hue. Iintensity maybe lowered by adding white or black.

The dropdown menu on the left contains the blending modes which we'll discuss fully in a minute.

Normal is the default, and the objects interact with each other as if they were both solid color objects, at 100% opacity. When one is over the other, what is covered you can't see.

The rest of the modes interact with each other in different ways.


To use layer blending modes you have to have two or more layers. The blend mode will react with the layer below it. If you have only a background, the blend mode popup will be grayed out, as these modes cannot be applied to backgrounds.

For these demos I will be using an image with two layers. The blending mode will be applied to Layer 1 and we'll look at the way they interact. 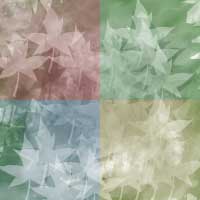 Normal mode is the default. The colors of the two layers will not interact in any way, and it will display the full value of the colors in Layer 1. What you see in the image window will look like this.

Dissolve makes the lower layer take on the colors of the top layer, and how much depends on the opacity of the upper layer. The Layer 1 opacity is set at 50% here.

Disolve only affects pixels with some transparency, which is why I lowered the opacity to 50% in this example.

Color Burn burns in the color of the upper layer with the lower layer. No part of the image will get lighter.

Linear Burn works like multiply but the results are more intense.

Lighten compares the two layers pixel for pixel and uses the lightest pixel value. No part of the image gets darker.

Screen brightens by lightning the lower layer based on the lightness of the upper layer. The result is always lighter, and makes it a good mode for correcting exposure in photos that are too dark.

Color Dodge dodges the lower layer with the upper layer, resulting in a lighter image. No part of the image will be darkened.

Linear Dodge works like screen but with more intense results.

Overlay multiplies the light colors and screens the dark colors.

Soft Light will multiply the dark tones and screen the light tones.

Linear Light is the same as Vivid light but it works on the brightness of the lower layer.

Exclusion uses the darkness of the lower layer to mask the difference between upper and lower layers.

Saturation changes the saturation of the lower layer to the hue of the upper layer but leaves brightness and hue alone.

Luminosity changes the luminosity of the lower layer to the liminodity of the upper layer while leaving hue and saturation the same.

This tutorial originally appeared on http://www.northlite.net, a website that no longer exists. I've saved this content for all Photoshop lovers out there that want to know more about Photoshop blending modes.

No comment(s) for "Layer Blending Modes in Photoshop and Elements"