I stumbled upon Mattijn Franssen's photo manipulations while browsing through Flickr. I was very impressed by his technique and style and decided to take him an interview. And even if he prefers to speak trough his art, he kindly accepted.

I like that Mattijn's artwork tells a story, there are not just another nonsense photo manipulations. He takes a concept or a feeling and he transpose it visually so perfect with a lot of character! If his artworks were not obviously surreal I might bet I am looking at real photos. That says a lot about the colors, the blending technique, etc. His images actually speak and sing a strange music for those that have soul to listen!

QHello, welcome to PSD-DUDE.COM! Please, introduce yourself, tell us briefly about yourself, where are you from, and how did you start in digital art?

AMy name is Mattijn Franssen, I live in Hilversum in the Netherlands and I'm a self taught oil painter, photo montage artist and musician. I also make small photo animations and drawings.

I have been drawing since childhood, did some illustration work ,from there it went on to (oil)painting and then in 2004 i discovered photography. In 2005 i started creating my first montages using photoshop. My montages i make from photos I take all around my country and sometimes a bit across the border. I create surreal / magic realistic fantasy landscapes with castles , mountains creatures and all kinds of impossible / dangerous situations that me and my cat as the main characters have to face. Since march 2009 I also make photo-animations. 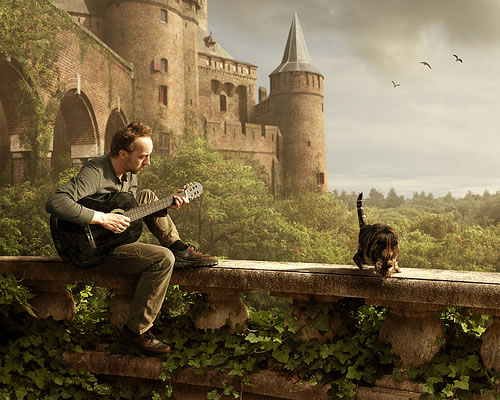 Dreaming with you by mattijn 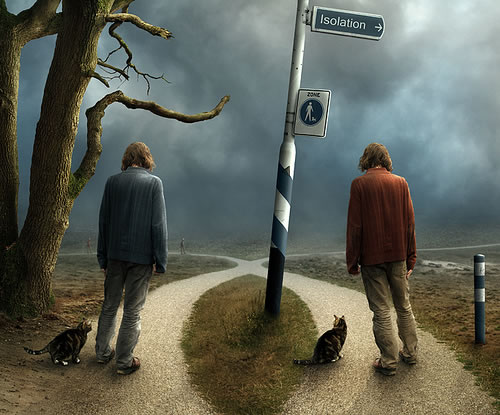 QWhat software do you use? The way you blend in various elements in your works makes one wonder if the surreal landscapes really exist somewhere. Tell us a bit about the techniques you prefer/use: photo montages, matte painting, color adjustments, etc.

AFor my montages I use only Photoshop, I make them from photos I take myself with a simple camera. I photograph all kinds of details that I can put together in my images. That way I have full control over my landscapes, I decide where the trees are gonna be and what shape the hills will have, create the lights and shadows and put together my castles. 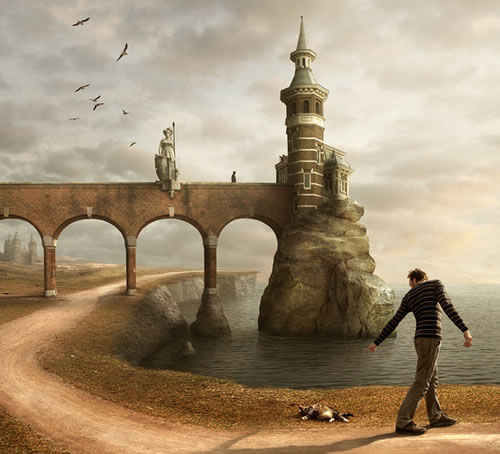 QI know that you are very interested in art, you are a photographer, a digital artist, a painter and also a musician. And I see that all of this passions blend beautiful in your art work! Does your music inspire your art or is it the other way around?

AMy music I make in a similar way as my photo art animations and paintings, its all layers, I work well with layers :) it's not inspired by my Photoshop art, except for the music i made for my animations, but it is inspired by the same daydreaming desire to escape to another world. 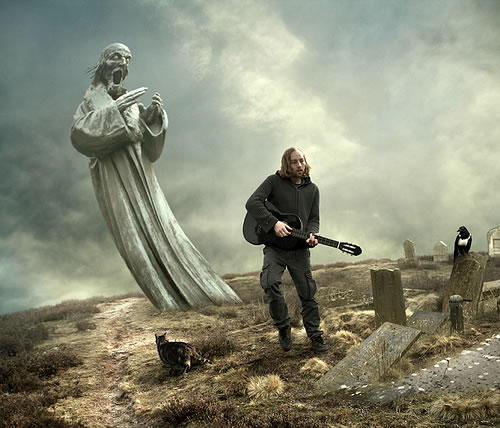 entertaining the dead by mattijn

QBesides the artworks themselves, I can clearly see that you are a very good photographer, as you said you only use your own photographs. What camera(s) do you use? Tell us a bit of accessories you use (tripod, flashes, lenses, filters). Do you use any post processing for photos?

AWell thanks for saying I'm a good photographer, I'm only trying to get the best/most out of a simple camera. I have an Olympus SP 3207.1MegaPixels
3x optical zoom
can shoot RAW and a tripod, not that great but good enough for how i work. 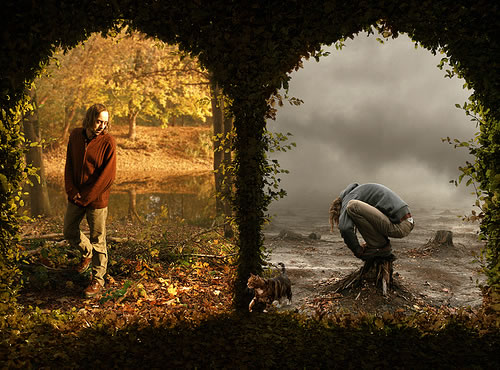 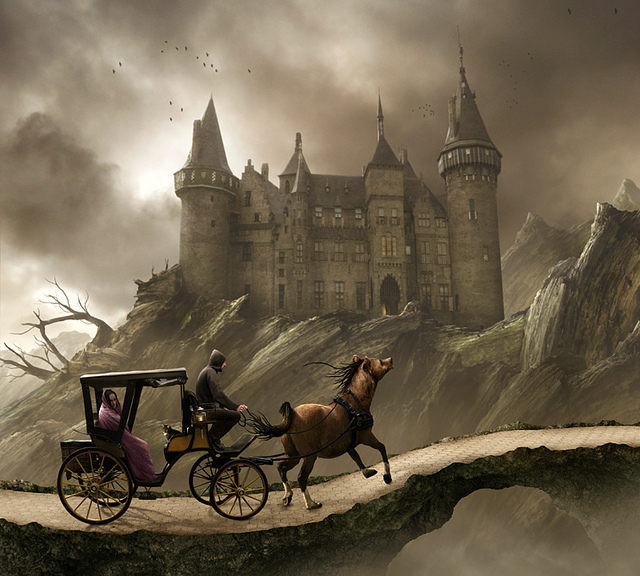 QYou have a lot of imagination! Tells us a little bit about your sources of inspiration besides music!

AI love the old master oil paintings from BreughelPieter Bruegel the Elder
(c. 1525 – 9 September 1569)
Netherlandish Renaissance painter and printmaker
known for his landscapes and peasant scenes, CaravaggioMichelangelo Merisi da Caravaggio
(29 September 1571 – 18 July 1610)
Italian artist known for his intensely emotional
realism and dramatic use of lighting had a formative influence
on the Baroque school of painting, van EyckJan van Eyck
(before c. 1395 – before July 9, 1441)
Flemish painter active in Bruges and considered one of the best
Northern European painters of the 15th century. and so on and reading about ancient worlds and stuff. And fantasy films like "The Thing" The Thing (1982)
A Timeless Look in Paranoia, a Horror Classic, "The Fly" The Fly (1986)
A brilliant but eccentric scientist begins to transform
into a giant man/fly hybrid after one of his experiments
goes horribly wrong. and "An American Werewolf in London" An American Werewolf in London (1981)
Two American tourists in England are attacked by a werewolf
that none of the locals will admit exists.. Also Ico Ico
a 2001 action-adventure video game.
It was designed and directed by Fumito Ueda, who wanted to create a
minimalist game around a "boy meets girl" concept., Silent Hill Silent Hill
a 1999 survival horror video game for the PlayStation and Prince of Persia: Warrior Within Prince of Persia: Warrior Within
released on December 2, 2004
a video game and sequel to Prince of Persia: The Sands of Time.were my favorite games, and i have always had this habit of imagining other worlds. First I tried to draw them, then paint them and now I find the best, most satisfying way is with photo montage . 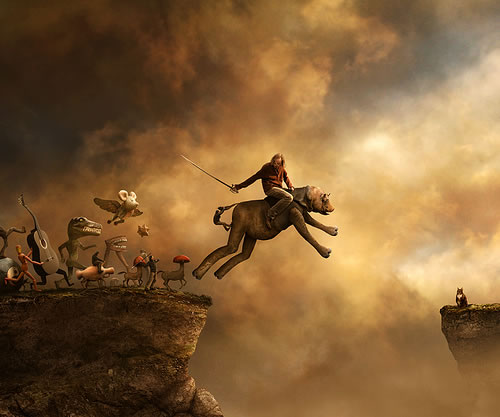 escaping the madness by mattijn

QDo you have a favorite digital artist or a favorite painter? Can you place your art inside a certain artistic genre?

AI think I work in different styles, some is surreal with influences from artists like Magritte René Magritte
(21 November 1898 – 15 August 1967)
Belgian surrealist artist.
He became well known for a number of witty
and thought-provoking images., some bizarre influences by Escher Maurits Cornelis Escher
(17 June 1898 – 27 March 1972)
Dutch graphic artist. He is known for his often
mathematically inspired woodcuts,
lithographs, and mezzotints. and David Lynch David Keith Lynch
(born January 20, 1946)
American filmmaker and visual artist
known for films like Blue Velvet and Twin Peaks. Sometimes i try to come close to the look of an old painting like a work from Anne-Louis Girodet Anne-Louis Girodet de Roussy-Trioson
(January 5, 1767 – December 9, 1824)
French painter and pupil of Jacques-Louis David,
who was part of the beginning of the Romantic movement
by adding elements of eroticism through
his paintings. for example and I make some magic realistic lonely landscapes that show influences from Hopper Edward Hopper
(July 22, 1882 – May 15, 1967)
prominent American realist painter and printmaker and Willink Albert Carel Willink
(7 March 1900 – 19 October 1983)
well known Dutch painter who called his style
of Magic realism "imaginary realism". 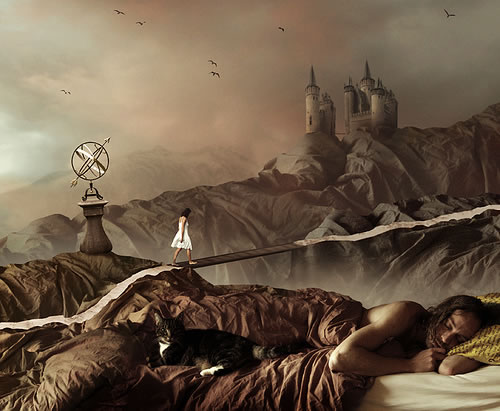 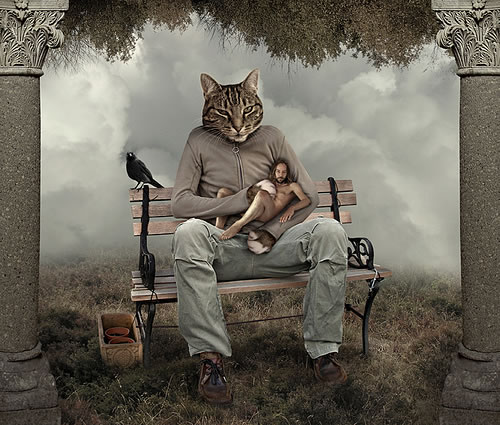 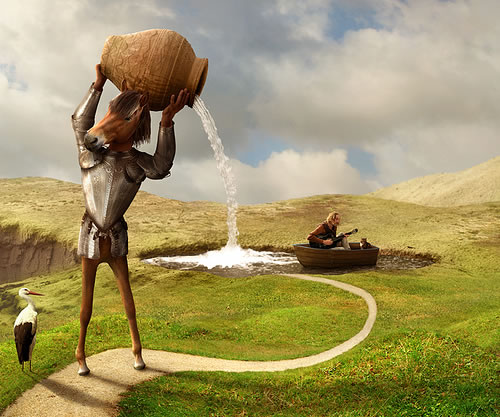 the water horse by mattijn

QI see that there is a lot of YOU in your images literally ... Also, in almost all your works, you appear more than once. Tell us a bit about the meaning of these clones and the postures you pose in.

AMe in my photos, it's because I want to go to these places, be in these worlds and experience these adventures. And I know how I have to pose so its easy to work with myself that way I don't need a crew or models. And if I want it not to be too much about me I will wear a hood or turn my back. My cat is always there, that's the way she is , curious and most of the time i put her on the image the way she is when I pose. I take my poses on my balcony with a self timer but I also make these kinds of adventures with other people as well. I design CD covers and things like that and the images I post on Flickr are like a storyline of the last 4 years. 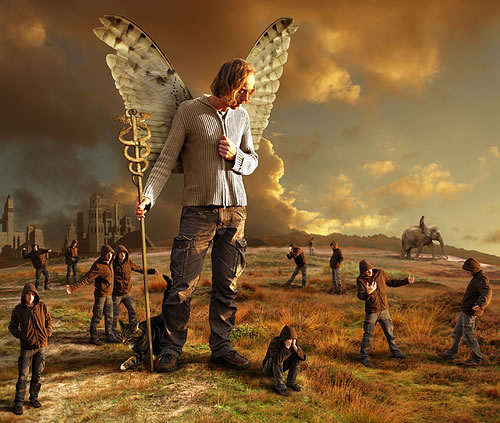 QI see spiritual and religious influence in your art! Are you religious and what religion elements inspired you?

AI'm not religious, I like the art that came out of religion, the cathedrals, pyramids, sculptures, paintings and stories. 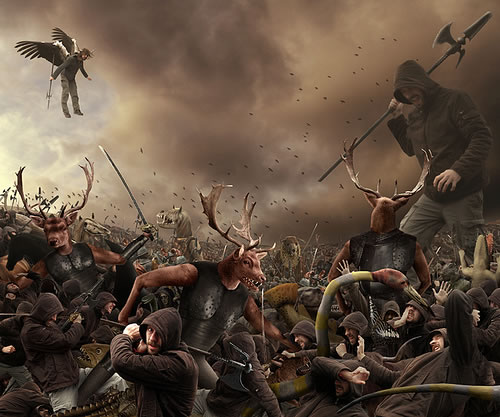 battling the cult by mattijn 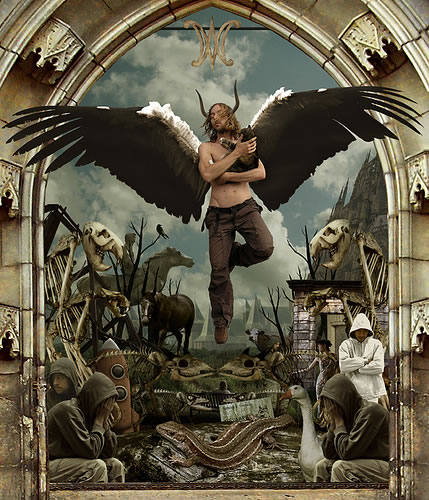 QI can see three characters that are repeating, the cat, the girl and you ! Pino is quite a character, that's the cat's name right? What is its story? 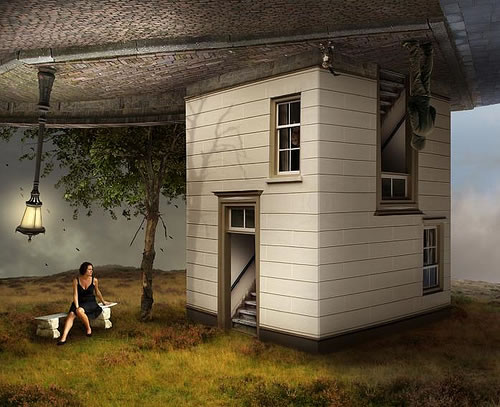 planes of existence by mattijn

QWhere can we find you on the internet? Do you sell your digital work, your paintings online?

AI have my website www.mattijn.com there you can find links to my animations music , my drawings and most of my paintings. I have a photo book that you can order online here 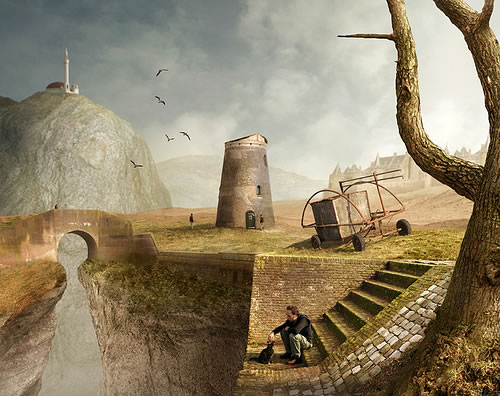 some quiet time by mattijn

QHow do you see your future in digital art? Do you have a lot of art projects coming?

AThis year I hope to make some money by creating worlds for anyone who wants to see themselves in a different way. Besides that I will keep working on my own photo story and maybe finish my new animation. 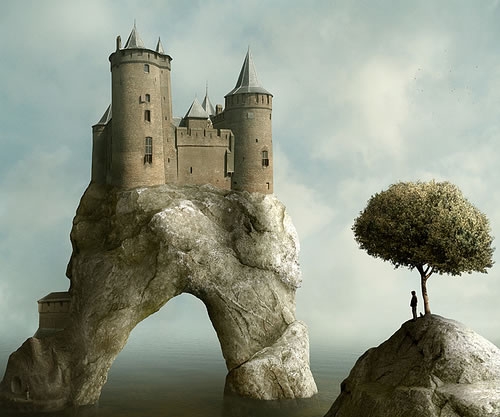 Mattijn, thank you for doing this interview for us and we wish you good luck with your work.

Here are some of Mattijn's other works that are among our favourites. 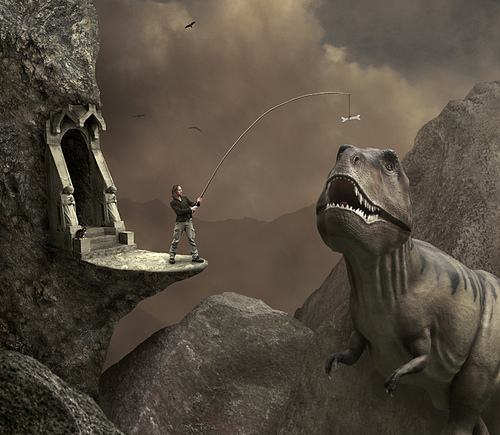 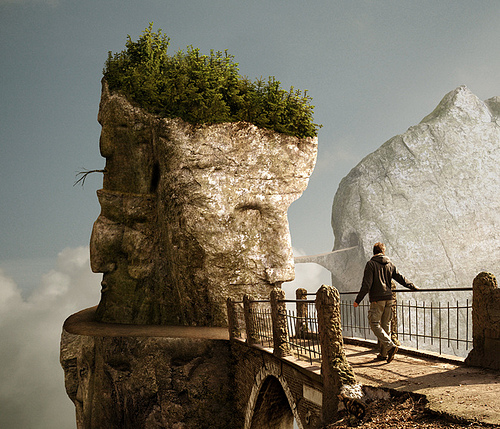 a tricky pass by mattijn 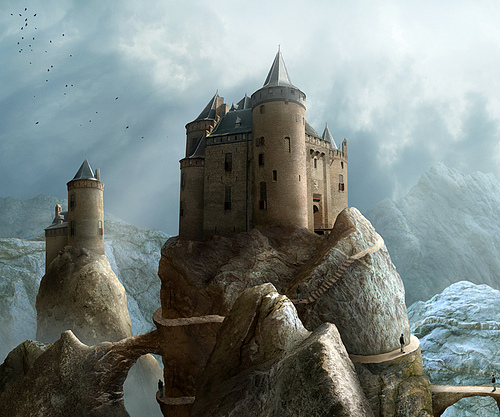 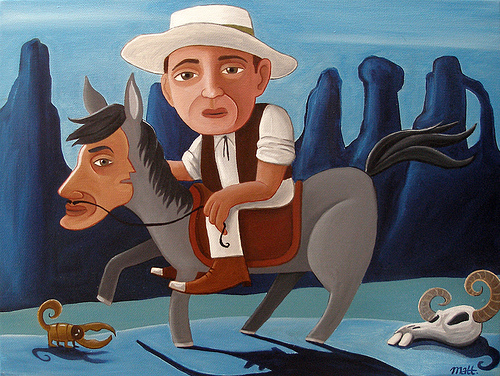 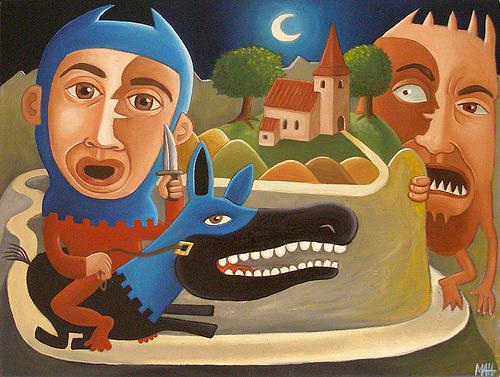 Since this interview was taken, Mattijn created lots of amazing photo manipulations. So if you love his style you must check out his New Photo Manipulations. If you want to support real art you can order some of the stuff that Mattijn makes (design cd covers, book covers etc and can make photomontages for any kind of purpose; photomontaged, illustration, paintings, photo print of any of his montages or a signed copy of one of his books, contact him at [email protected]

PsdDude
7:00 AM Sunday, August 1, 2010
You are right Cindy, i also think that Mattijn is a very special digital artist, extremely talented. And i also like his paintings, very interesting style! reply

PsdDude
7:00 AM Wednesday, August 25, 2010
I totally agree he is a master of photo manipulation, great ideas and execution as well! And yes his art works deserve to be seen by many people! reply

Cindy Grundsten
1:06 PM Monday, April 29, 2019
Wow this guy Mattjin is really fantastic! Wonderful art and very well done. I love that he always have his cat in his work. Its something special I think.
And its also fantastic that he take all the shots himself and then use them to build up this reply

arnoud venema
1:06 PM Monday, April 29, 2019
I admire Mattijn's work and I invited him to expose a selection in our galerie ART33 in Doorn.
I realy hope he's still considering my proposal, because his work merrits to be seen by as many people as possible!
HE IS A CLASS OF HIS OWN! reply