Lost Princess in the Magic Forest 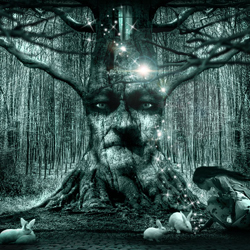 I was always a big fan of fairy tales like the ones written by Hans Christian Andersen or Grimm Brothers. The classic Arabian fairy tales were also some of my favorites as long with my native country stories. Princes and princesses captured me in my childhood and even now I find great pleasure in watching Disney cartoon movies inspired by this beautiful children's book fantasy stories. In this photo manipulation tutorial we'll create a fantasy magic forest landscape with an alive talking tree as main character. A lost princess surrounded by charmed white rabbits will complete the picture. This Adobe Photoshop tutorials is one of my first tutorials; I added some updates, so I hope you will enjoy it. 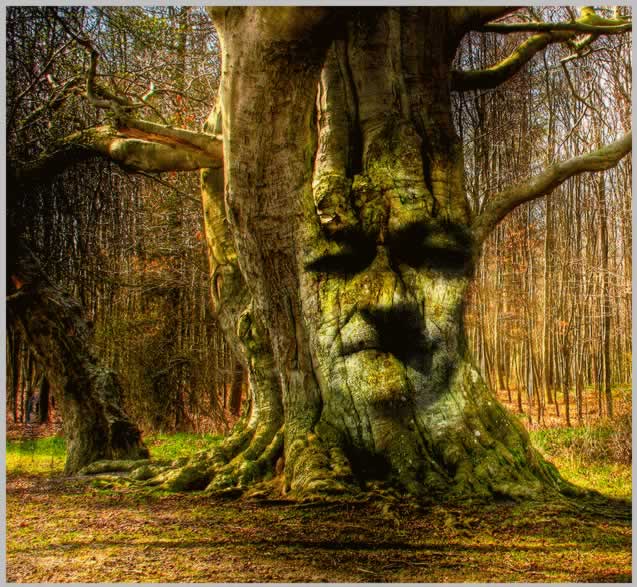 Scale the eye to 10 % and than easily erase the skin area. 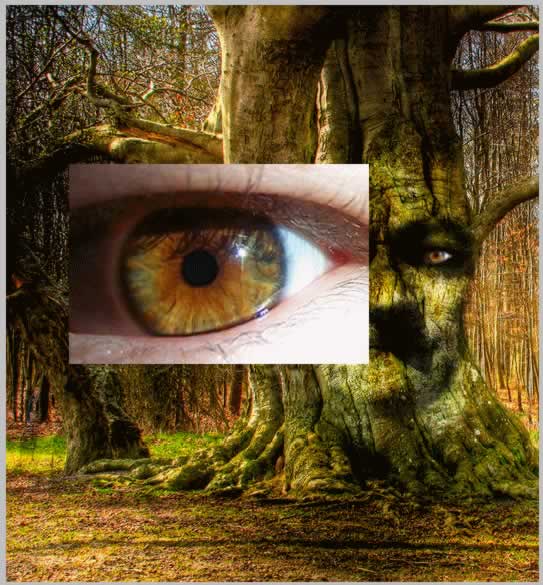 Now the eye is a little to bright in comparison with the rest of the face. So go to Image – Adjustment – Brightness / Contrast : 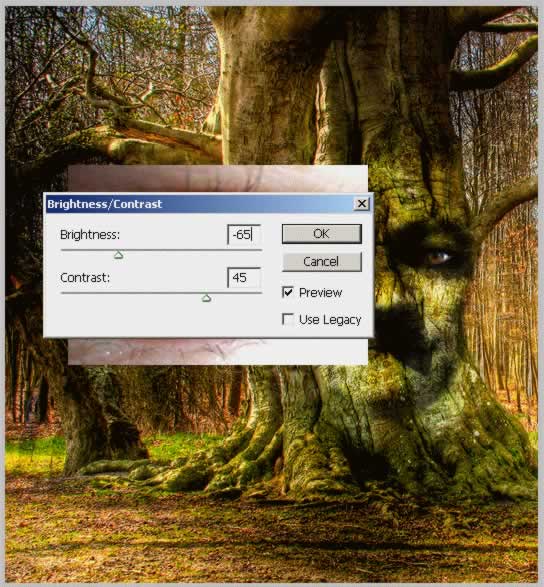 The next thing to do is give a little symmetry to the tree. Because the left side of the tree is a little odd I will duplicate the right side and move it to the left side.

So above all the other layers create a new one called TreeImage. Go to Image – Apply Image.

I have now a layer that contains an image of all the visible layers merged.

Make a selection like in the image, press CTRL+C and CTRL+V . A new layer was created; go to Edit – Transform – Flip Horizontal : 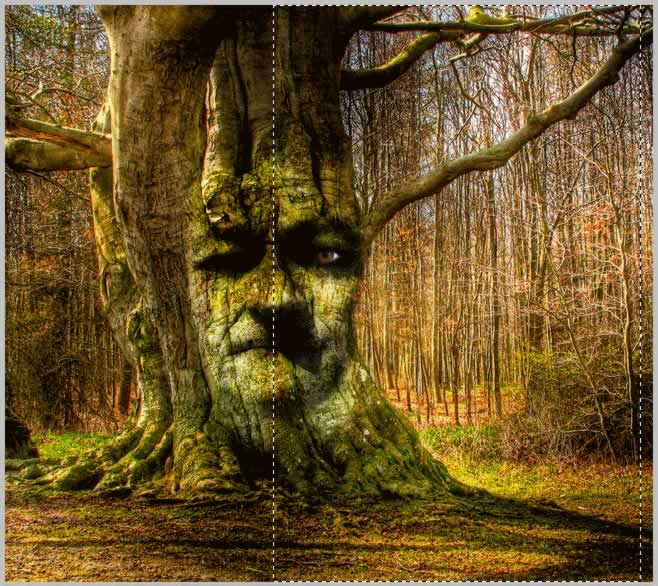 Move the selection to the left area. With the Eraser Tool erase part of this selection as shown in the image below...i have colored the image to see exactly what you have to erase;the red area is the one that stays , the rest was erased: 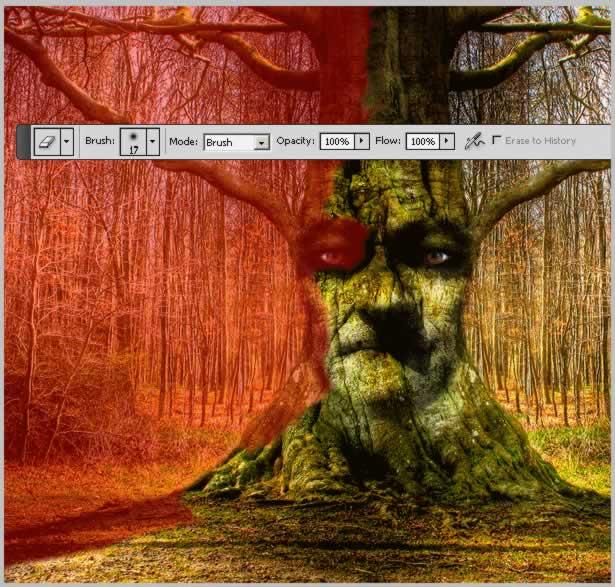 I did that move because:

The left area was not suited for a face blending

I wanted to give the tree a symmetric look

I have erased that parts because if you can notice there can be one shadow for the nose and in the duplicated case we had 2 shadows.

And last but not least I have erased parts of the tree to look symmetric but not the same. 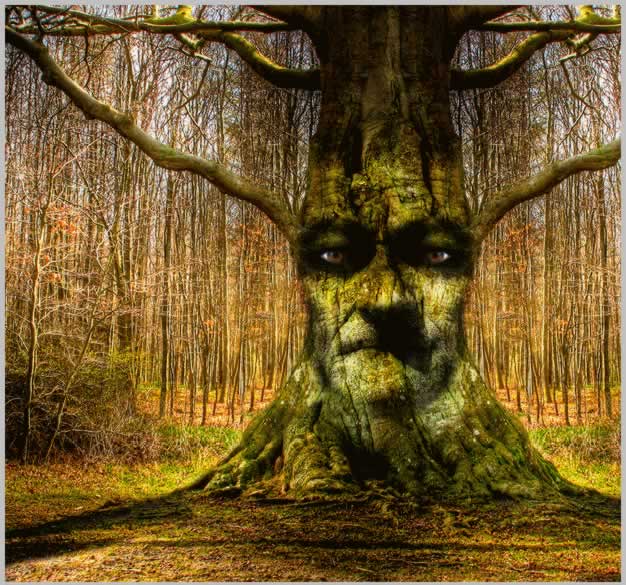 The Tree looks pretty good but I want it to be the house of the fairies; so I will added a magic window to look like a home. I have found this lovely photo Old Window .

I have to first crop only the window without the stores: 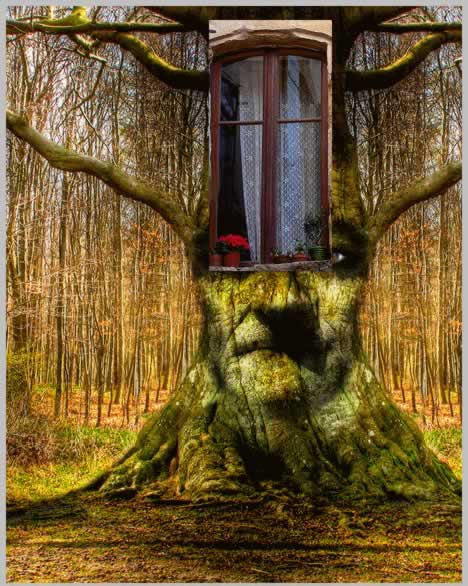 Resize this image to 40% . With the Eraser Tool and the Burn Tool try to blend the window with the tree as good as you can: 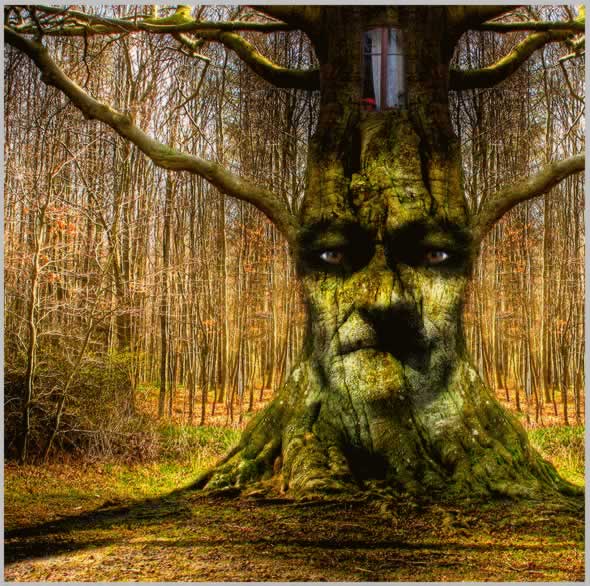 Add the princess , photo In the fog .

Create a Giraffe Leather and Fur Typography in Photoshop

24 comment(s) for "Lost Princess in the Magic Forest"

please leave a message if you liked it... or even if you didn't like it

PsdDude
7:00 AM Friday, June 4, 2010
Thank you Arturo! I will take into account all you advices! I am learning and all your comments are helping me to improve and i know i have a long road ahead!
By the way i saw your site , very good works you have there ! reply

mike
7:00 AM Saturday, December 4, 2010
nice lesson, only towards the end you say "Create a new layer and go to Image - Apply image..".
My question would be apply it to what? screen?
and is this just a blank layer your applying? reply

So the answer is: select the new blank layer and then Apply Image and choose Layer: Merged and Blending: Multiply ... the idea is to obtain only one layer with all the visible layers merged.
reply

Rajni Setia
1:19 AM Saturday, May 3, 2014
Very nice tutorial, we have featured it here : http://theneodesign.com/best-adobe-photoshop-tutorials-april-2014/ reply

Lori Diane
2:17 AM Wednesday, October 29, 2014
Hi PSD DUDE, I really loved your tutorial for the lost princess in the woods. I have never done anything like this before and you made it so easy to understand breaking down the steps and the flow of the process. I went a different direction with mine while still using some of your images and concepts and including my own as well, like my daughter sitting on the suitcase. I just wanted to share my finished piece with you and say thank you for inspiring and guiding me through the process!

PSDDUde
2:47 AM Wednesday, October 29, 2014
I am so glad you were inspired by my tutorial to create this beautiful photo manipulation. Very creative work, I love it! reply

Occupational Therapy
1:06 PM Monday, April 29, 2019
I????????ve recently started a blog, the information you provide on this site has helped me tremendously. Thank you for all of your time & work. reply

John
1:06 PM Monday, April 29, 2019
I have added the tut on my site! It looks really nice and the tree is amazing !
By the way i am working on adding a "submit tutorial" on my site so you can add the tut yourself!
reply

Arturo Velazquez
1:06 PM Monday, April 29, 2019
Not bad ) but i would like it more with the original eyes and maybe play a bit more with the lights on the girl, keep the good working )) reply